How it all began

"Affect change, don’t be an audience. Walk your own path, and instead of thinking outside the box imagine "what if there was no box.”

Lonerider opened its doors in Raleigh, North Carolina on January 23rd, 2009 with a beer and a dream. Today, Lonerider is distributed in nine states and is counted amongst top 150 breweries in USA. An Inc. 5000 and CED Top 25 winner, with an eye for quality, Lonerider crafted each of its beers with the highest quality ingredients. As a result, Lonerider has a portfolio of award-winning beers, including medals from the Great American Beer Festival. 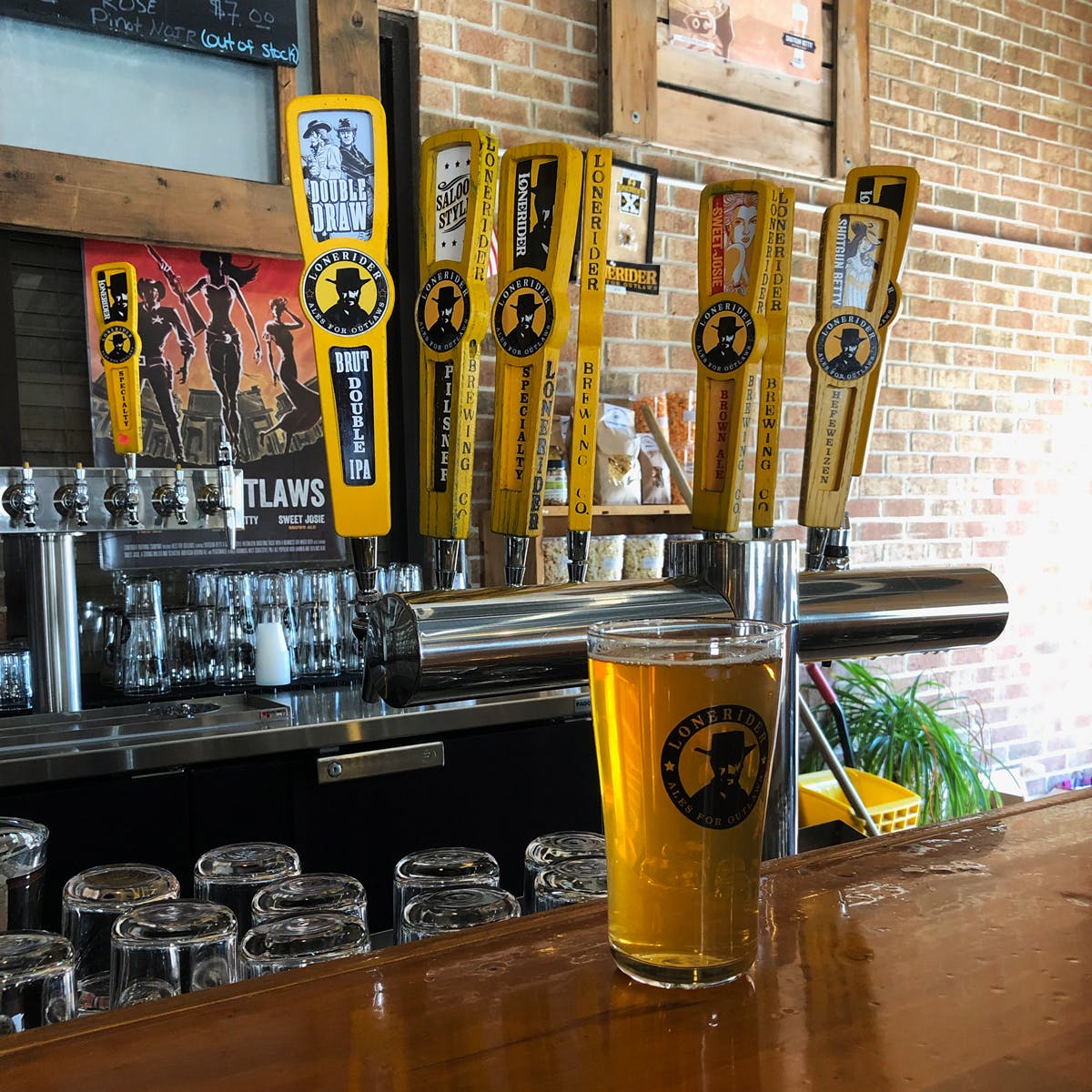 Over the years, we’ve been overwhelmed by the number of outlaws with an enthusiasm for craft beers. With such a tremendous variety out there, we can’t even begin to express our gratitude to the community that’s supported us. We’re proud to be located in North Carolina, which has undoubtedly become THE Southern State for beer.

Remember there is a Lonerider in all of us!

Meet the outcasts that make up our crew. 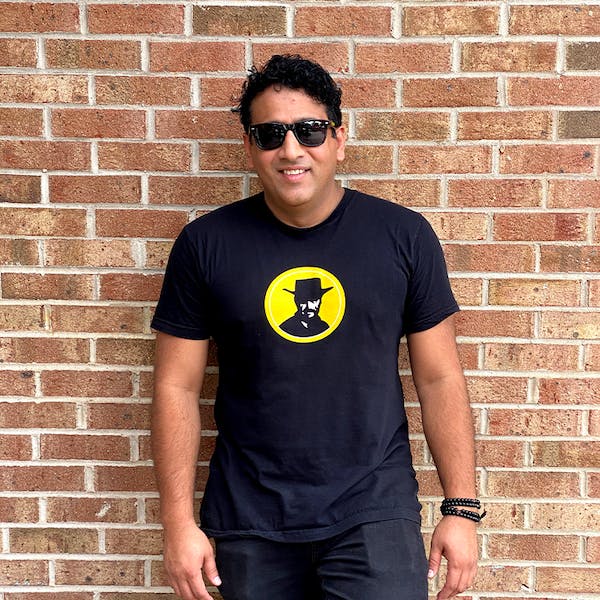 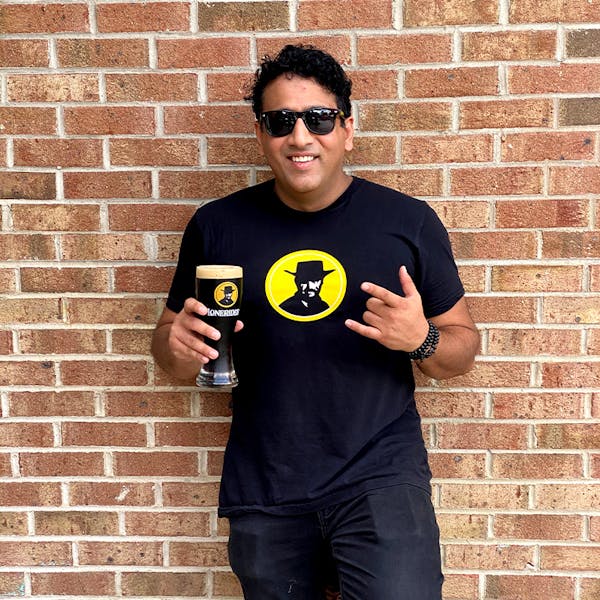 Pretty much all of them.

Very proficient in consuming multiple pints of beer with alacrity. In addition, I am fond of saying that technology drove me to drink.

What made you want to work at Lonerider?

I enjoy working with our team. As a guy from India, by way of Alabama, running a West Texas Themed brewery in Raleigh, NC, and shipping a German-Style Hefeweizen all the way to Amsterdam pretty much describes my desire to be here.

What makes you an Everyday Outlaw?

I believe that being an Outlaw is a state of being. It’s unapologetic, decisive, and an instrument of change. It’s also self-deprecating with a twinkle in the eye sort of humor. It’s the handshake with somebody who is in the know; an us against the world fist bump. Whether we choose to defy social norms or we do a simple act of kindness for somebody when they need it the most, we end the day with the same promise. We are here to stay, and we will not apologize for what we do. You may see us and choose to ignore us, but be certain that we will affect change.

What are you most excited about, what’s next for Lonerider?

A new Lonerider that is ready for the next ten years and beyond. And that only happens with the great Band of Outlaws I am proud to work alongside every day. 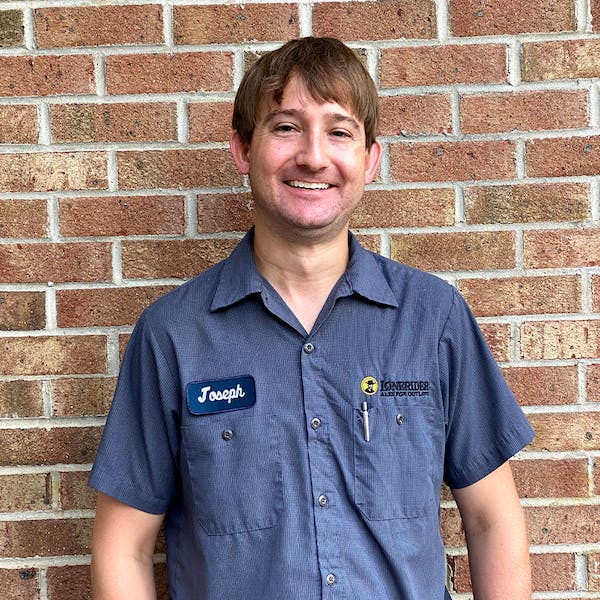 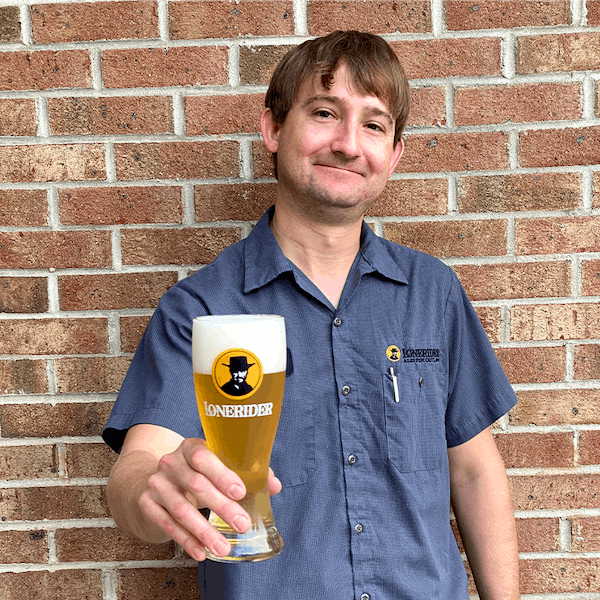 What’s your favorite LR beer: I have been enjoying Gold Dust Light IPA recently. My favorite tends to change with the season.

What made you want to work at Lonerider?  When I moved back to Raleigh from Wyoming, I visited a lot of breweries. I asked around, and everyone said that Lonerider made great beer, and was the most consistent brewery in the triangle. Knowing what I knew about brewing, I knew consistency was much more impressive than occasionally producing a new fun beer. I applied and pestered the company until they gave me a job.

What makes you an Everyday Outlaw?  The decisive way I approach something when I want it. When I met my wife, I lived in Wyoming and courted her from across the country for four months until I got to Raleigh. We have been married for seven years.  When I decided I wanted to work in craft beer, I looked into every brewery in the Triangle, even though none of them were hiring. I called Lonerider every day until they gave me a chance. That was eight years ago. When I decided to go back to school to finish my degree, I jumped through every hoop I had to. It was exhausting, but working full time and going to school part-time led to my graduation a year ago with a 4.0 GPA in Food Science courses. I will approach my next challenge with the same enthusiasm. It’s the only way I know how to.

What are you most excited about, what’s next for Lonerider? I love the direction that Lonerider is moving with the Everyday Outlaw series, as well as the beer plan for next year. It’s always fun to make new beers and showcase the talents of the brewers. This plan will allow us to do that. 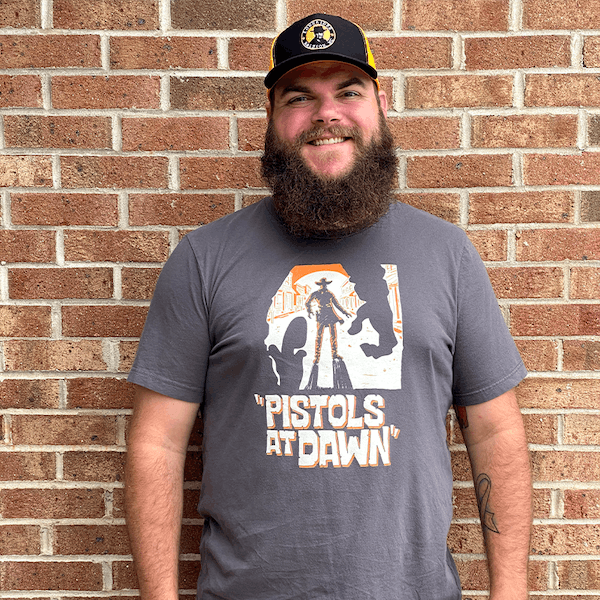 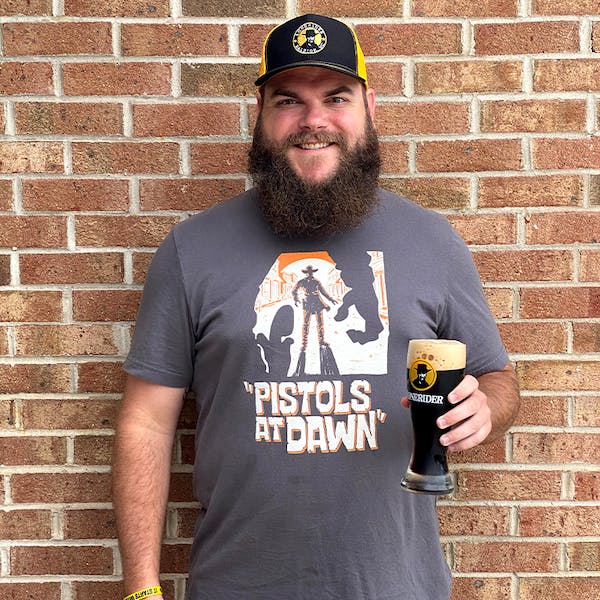 What is your favorite LR beer: Pistols at Dawn

What’s your background? I have an MBA from St. Bonaventure University; I have worked in public accounting and the garbage industry, and I am working on a Certified Brewer’s Apprentice certification from Wake Tech Community College. I started with Lonerider in December 2019.

What made you want to work at Lonerider? Lonerider is an amazing family that makes great beer. I left corporate America to pursue a career in craft beer, so it was a match that was meant to be.

What makes you an Everyday Outlaw? I will try any beer once! I’ve been enjoying craft beer for a decade now, and my palate is always ready to try something new and unusual.

What are you most excited about, what’s next for Lonerider? I’m excited to see us challenge the status quo of craft beer and put out some great new products. 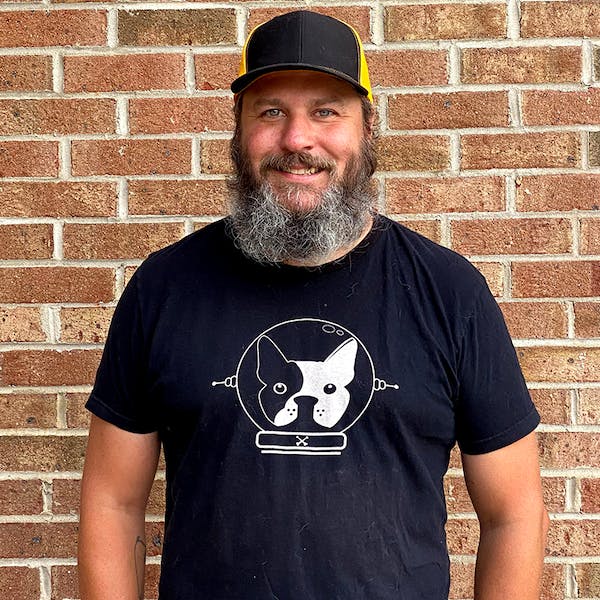 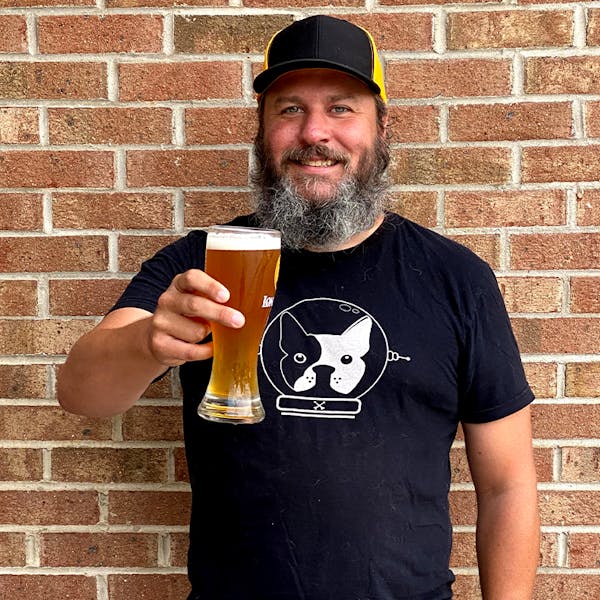 What is your favorite LR beer: True Britt

What’s your background? I’ve had a long career in marketing. I spent nine years doing international marketing and promotions for Universal Records, then on to channel and EMEA marketing for a 3D company. I co-founded a company called Source3 that was later acquired by Facebook and immediately started a new company called Zookies Cookies afterward that was part of Shark Tank Season 10.

What made you want to work at Lonerider? I’ve always loved a challenge and an, in particular, something that I am passionate about and has a tangible product in the end that I enjoy. I’ve lived in Raleigh for 11 years now and remember the first time the brewery opening up. It’s been great to become part of the family.

What makes you an Everyday Outlaw?  I’ve spent the majority of my career as a chameleon. Whether it was marketing Akon worldwide to running EMEA marketing for a 3D software/printer or co-founding two different companies, I’ve always been able to blend in and provide a renewed approach to what I’m working on at that particular moment. The ability to pivot and take challenges heads are what get me fired up.

What are you most excited about, what’s next for Lonerider?  We purchased a labeler this year, which has allowed us to expand our seasonal/limited release offerings. It’s something new for us at Lonerider, and we’re going to have a lot of fun with it and bring out some great beers because of it. 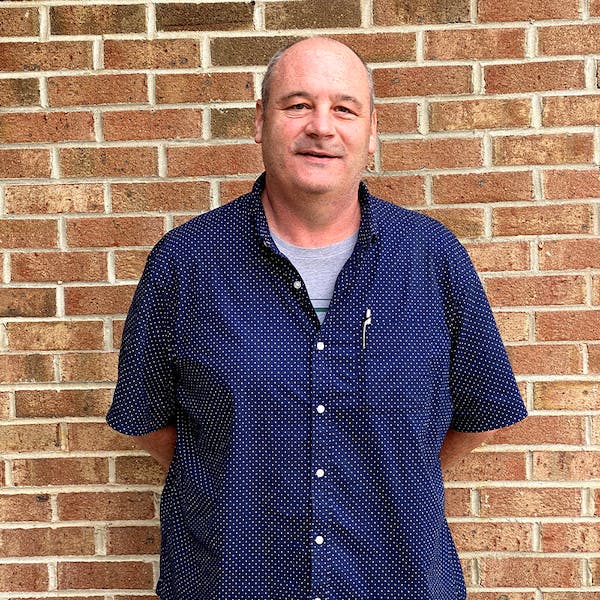 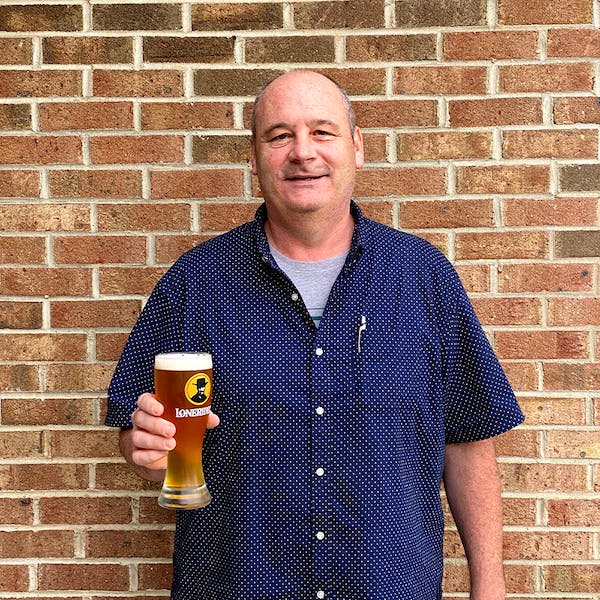 What’s your background?  Many, many years with consumer goods companies, mostly with Adult Beverages.  I keep trying to move away from this business, but it keeps pulling me back in.  Selling craft beer is the funnest thing that I’ve done during my career – definitely no difference at Lonerider.

What made you want to work at Lonerider? Our owner – Sumit Vohra.  I’d heard a ton of great things about him through working in the industry over the past few years and what he was doing with the Lonerider brand.  Since you’re never too old to learn something new, I decided to jump on board when I saw the opportunity.  Zero regrets.

What makes you an Everyday Outlaw? Never accepting the status quo and always questioning how we do things.  I’m not a fan of change for change’s sake, but we should always take a step back and ask the question, “Is there a better way to do this particular process?”  If yes, let’s get the ball rolling and make the move – don’t delay.  If not, move on to the next process and start all over again.  Adapt or die.  Every….friggin…..day…..IHSV

What are you most excited about, what’s next for Lonerider? We’re taking an established brand (10+ years) and injecting new life into it.  We’ve got an awesome track record with our quality of beers.  The lineup that we’re pulling together for the upcoming year is going to amaze a lot of folks – beer nerds and newcomers alike.  With all of these new beers, there are a ton of challenges that go along with getting these new liquids in front of our retailers and consumers.  Those challenges are what gets me going every day – a new opportunity to introduce someone to Lonerider and turn them into an Outlaw! 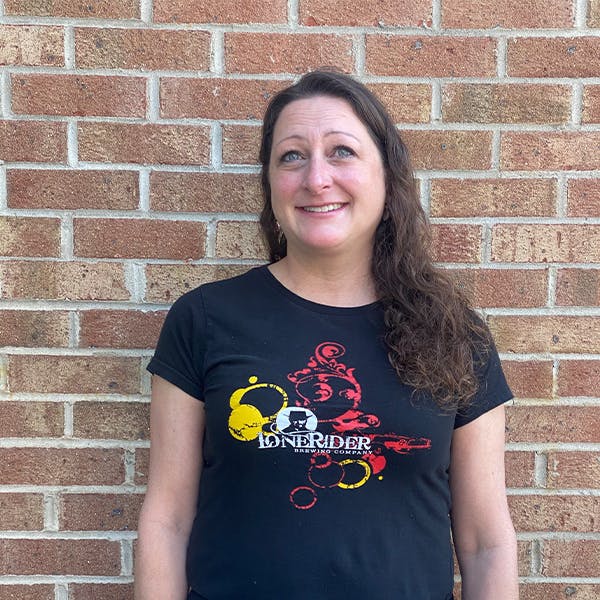 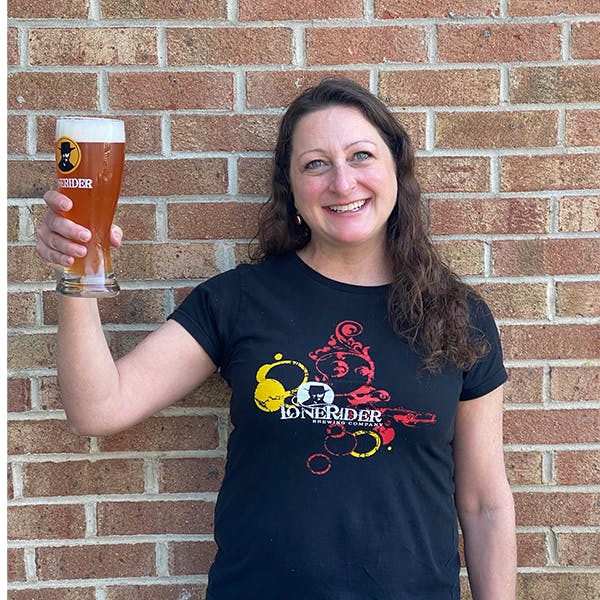 What made you want to work at Lonerider? Love of beer, supporting local, and the similarity of living an “outlaw” life.  Who doesn’t love blazing their own path?  Others follow or find themselves in a den of hungry lions.

What makes you an Everyday Outlaw? Life.  Walk a mile in my shoes means nothing.

What are you most excited about, what’s next for Lonerider? People.  Sparking that “outlaw” in everyone I interact with.  I enjoy sharing Lonerider’s unique crafted brews and now able to personally deliver them to your favorite locations. 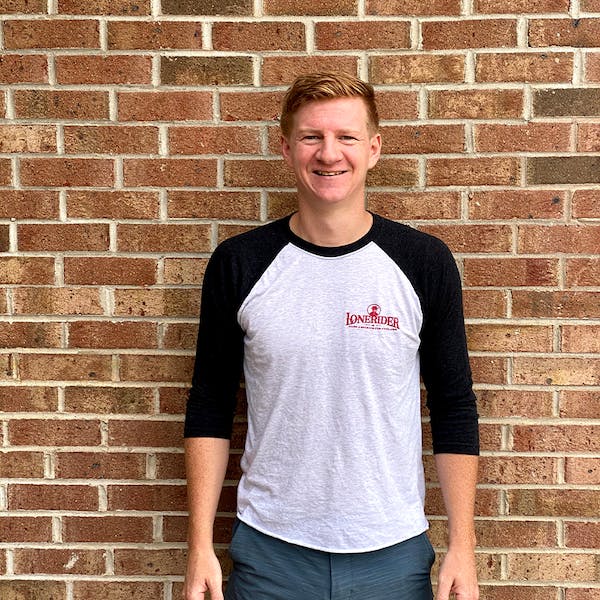 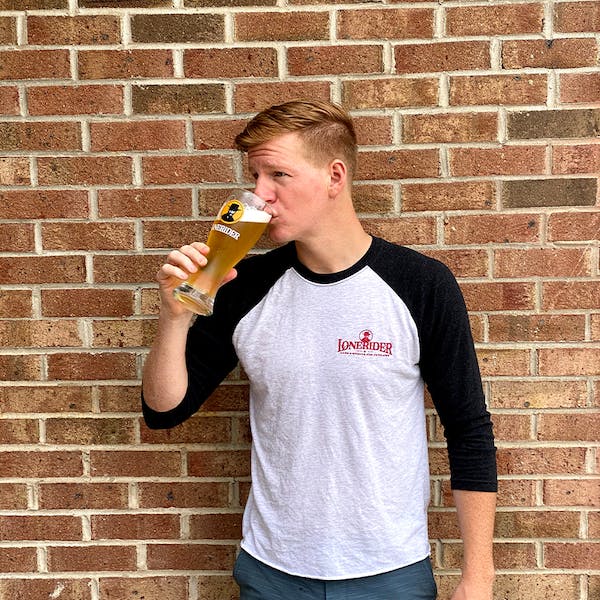 What is your favorite LR beer: I love all of them.

What’s your background?  Facilitation of getting things done at the brewery and for the brewery.

What made you want to work at Lonerider? They were the first suckers I could get to hire me when I moved to Raleigh from Charlotte.

What makes you an Everyday Outlaw? I love doing things outside of the norm.

What are you most excited about, what’s next for Lonerider? To open!! Also, excited to be apart of the next line of beers coming out. It’s a great representation of us behind the brand. 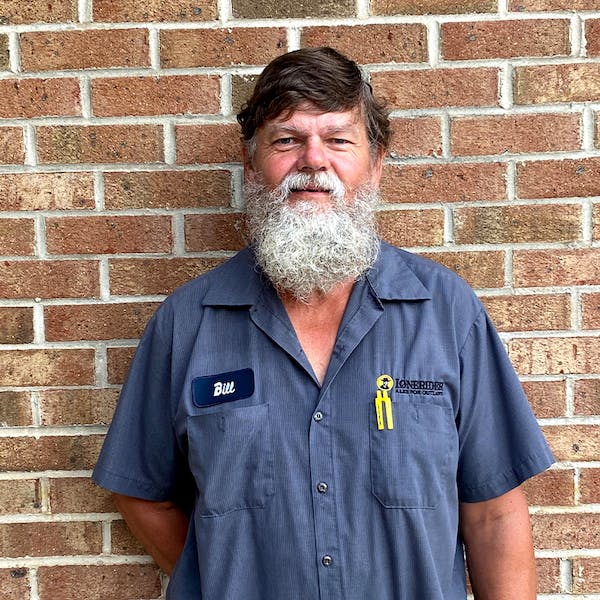 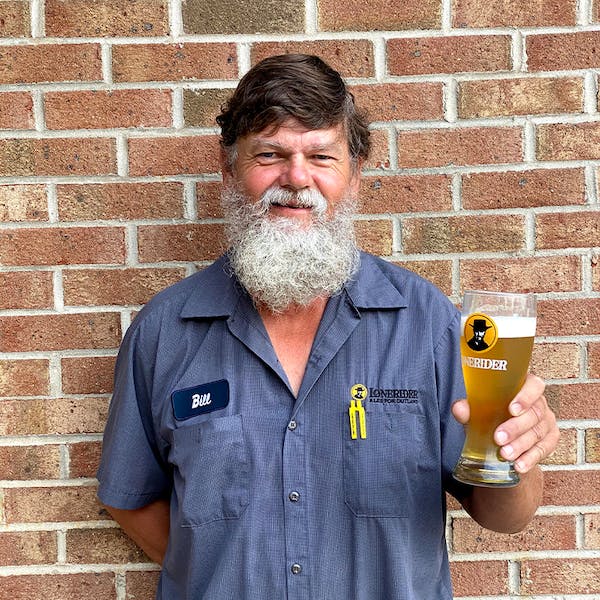 What is your favorite LR beer: Gold Dust

What made you want to work at Lonerider? After talking with the owner and CEO Sumit. I could feel the family atmosphere. I was sold.  Best decision of my career.

What makes you an Everyday Outlaw? I will do whatever it takes to help and protect my family and friends. Drinking a Gold Dust at 7:30 in the morning helps out too.

What are you most excited about, what’s next for Lonerider?  The dedication and enthusiasm of the team that we have in place to continue to grow LoneRiders Outlaw nation.

For the outlaws outside of town